This story was written for College Town NC by Rilee Vo, a communications intern at Live It Up! Hillsborough Street, as part of a content sharing partnership. 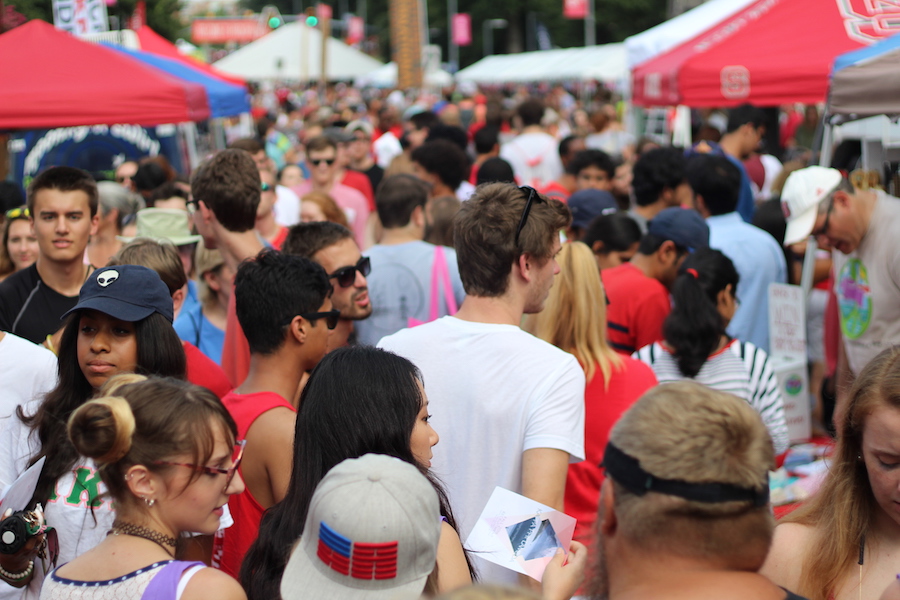 Packapalooza marks the end of N.C. State’s Wolfpack Welcome Week. It officially welcomes college students to their new city and brings back old alumni to re-experience the Red and White.

Packapalooza starts at 2 p.m. on Hillsborough Street on Saturday, Aug. 19, and lasts until 10 p.m. You can find out more about the event here.

For those who have never been to Packapalooza, N.C. State and Hillsborough Street go all out on freebies, information and entertainment for new students, their families, and alumni.

The daylong block party is broken up into different zones, and entertainment stages are spread throughout the street. Here are several things you won’t want to miss:

Wolfpack Zone
This is where you’ll find most of the student athletes and coaches signing autographs. Keep your eyes peeled for the football, basketball and volleyball teams. If you’re trying to get tickets for the first home football game, stop by the athletic department tent here for more information.

International Zone
Here, you can learn to write Chinese calligraphy or play African drums! Many of the university’s international groups will be there showcasing their culture’s highlights, and there will be a parade of flags at the end.

Green Zone
This zone highlights ways students can save money and reduce their carbon footprint. You’ll get a guide to the Triangle transit system and can talk to local YMCA groups to hear about how to live a healthy lifestyle.

Art Zone
If arts is more your thing, check out this zone for performances by the Cirque de Vol performers, the Pickle Mamas and One Tribe. A “Before I Die” wall will be available for those who want to express their bucket list goals. You’ll also find an adult coloring tent here — the perfect way to de-stress before diving into school work.

Live entertainment stages
The Spin Doctors will headline the Bell Tower stage. Other performers include South 85, Great Father Whale, Milk N’ Honey, Quency, Katie Rose, local ComedyWorx entertainers and so many more. There will also be student organizations performing, like the N.C. State a cappella groups and the NC State Pipes and Drums.

Service Zone
Bring non-perishable items to help Feed the Pack. The most needed items include canned fruits and vegetables (not green beans or corn), breakfast foods (not oatmeal), pasta and grains, snack items, beverages and condiments, and personal hygiene products.

Other things
Live It Up! Hillsborough Street is the presenting sponsor of Packapalooza for the sixth year in a row. Stop by our booth to ride a Harley-Davidson motorcycle in a special partnership with Ray Price Harley-Davidson.

Coca-Cola is also a sponsor this year. Look out for their tent, where they’ll let festival goers customize their own Coke bottles.