Goodnight’s Comedy Club opened in 1983 in the height of the stand up comedy craze, and through the years, it has earned the reputation for being one of the top comedy clubs in America. Goodnight’s has been sited in both USA Today and The Wall Street Journal as “One of the Top 10 Places to Sit Down and See Stand Up.” The best in the business have headlined Goodnight’s, including Jay Leno, Jerry Seinfeld, Ellen DeGeneres, Chris Rock, Louis C.K., Rosie O’Donnell and many, many more.

Goodnight’s Comedy Club has stand up comedy shows every week where established stars and rising stars alike take the stage and deliver laughs, with Open Mic Night every Wednesday night and professional shows every weekend.

Goodnights offers a limited menu in the comedy club, but there is a full service restaurant on the first floor called The Factory. The Factory menu consists of classic American fare and some Tex-Mex options. 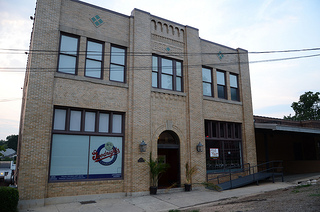