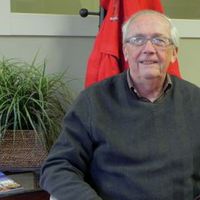 George Chapman served from 2006 to 2009 as the Chair of the Hillsborough Street Partnership, a non-profit, volunteer based organization formed to promote the revitalization of the Hillsborough Street corridor in Raleigh, NC.  It was created in the 1990's and now serves as a mechanism to continue public input to the Hillsborough Street Community Service Corporation. Mr. Chapman previously became involved with the revitalization of Hillsborough Street when he was Planning Director of the City of Raleigh until 2005.  He is a graduate of the UNC Department of City and Regional Planning and the College of William and Mary, in Virginia.  He lives with his wife in Raleigh, where they operate Woodburn Cottage, a small inn which he describes as a “life style Bed and Breakfast”.  In spite of his affiliations with that other university to the West, Mr. Chapman remains an ardent Wolfpack supporter, having been a neighbor for more than 30 years!