Originally built to pay tribute to those who fell in past conflict, the belltower has become a symbol of inspiration to the Wolfpack community.

The idea for a monument to honor NC State alumni killed in World War I originated with Vance Sykes, a member of the class of 1907.

By 1920, Sykes and other alumni had formed a planning committee and hired architect William Henry Deacy to design a memorial tower at the entrance to the campus on Hillsborough Street.

Today, the 115-foot monument, called "a legend in stone," is a symbol of the university and a rallying point for the campus community. Constructed at a cost of more than $150,000, the tower is made of 1,400 tons of granite set on a 700-ton concrete base. Its blending of Romanesque features and Gothic verticality are reminiscent of the towers at West Point. 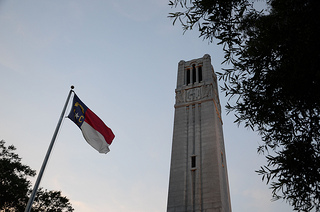